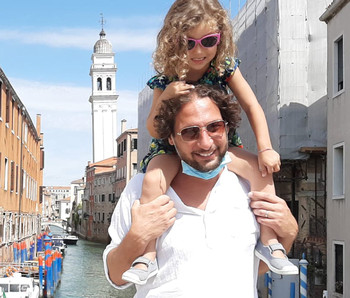 I'm a Brazilian/American artist living in Brussels. I was born and raised in Brazil from where I moved abroad at the age of ten due to my father’s work. I have been traveling the world ever since, having lived in fourteen countries and am now based in Belgium. I studied journalism in Boston, Renascence art in Florence and film in Barcelona. After a few years in the film industry I decided to take up humanitarian labor where my relationship with photography was sealed. I took several  photography workshops among them one with Patrick Zachman and another with Alex Webb.

I started working with photo collage in 2018 and since 2010 work as a street and documentary photographer. My documentary photography developed during my time in the field as a humanitarian worker and my street photography developed as I passed through major Western metropolis during my travels between missions. Photographing was a means to come to terms with the shocking contrast between the reality in the field and that of cities in developed countries, hence photography became a way to comment on the human condition. The isolation and alienation in the modern metropolis and the paradoxical and the absurd in our society are recurrent themes in my work. In my photography I search for that fleeting moment when magic happens and some aspect of the human condition is summed up in an image, and the world is caught in a nut shell, much like proverbs translate chapters of human experience into maxims.

I have exhibited my work at the De Markten cultural center in Brussels in two different occasions, the first exhibit was about my documentary work in Syria during the war and the refugee camp in Calais, France and the second was about my ongoing fine art photography work on Belgium. A Retrospective of My work about Syria, Central Africa, Palestine, Calais and a Red Cross refugee center was exhibited in the Cite Miroir cultural center in Liege for the twentieth anniversary of operation of the Red Cross refugee center in Nonceveux, Belgium.

My work about the refugee camp in Calais was screened at the 2016 Visa Pour L’image festival, I had a Coup de Coeur from ANI for my work about e Red Coss refugee center, and various other projects have been published, among others, by Liberation, Caros Amigos magazine, l’Oeil de la Photographie, Imagine magazine and MSF publications.

Most of my photographic influences come from the ground breaking perspectives in documenting our social phenomena of Magnum agency photographers. Painting is also a very strong influence on my work, it was so before photography became one, the most prominent being the allegory and social commentary in the works of Bosh and Bruegel and other painters, the composition and the subject matter of renascence painters, the portrayal of the human mind and soul of surrealist painters who delved into the human abyss in their work, and the use of irony in Pop art through juxtapositions of different mundane objects of mass culture.